Icasaracht was the last white dragon matriarch, and was killed almost a century before the events of the Icewind Dale game.

As dragon queen, she ruled the Spine of the World for centuries.

The human warrior Aihonen from the Ten Towns fought Icasaracht in an epic battle. She killed him, but in his last moment he successfully pierced her heart with his sword. Both fell into the lake Lac Dinneshere.

An isolated barbarian tribe called the Tribe of the Great White Wyrm, living on the Sea of Moving Ice, continue to worship her.

For almost a century, Aihonen's sword was embedded in Icasaracht's corpse on the bottom of Lac Dinneshere – until the sea spirit Elisia removed it to return it to Aihonen's descendant Jhonen in Easthaven.

It turns out that

Icasaracht had taken precautions against death:

In the event of her death, Icasaracht's soul would automatically be moved into one of those two bodies.
However, this could not occur as long as Aihonen's Broken Blade was stuck in her corpse's heart. When the sword was removed, the soul transfer finally occurred, and Icasaracht awoke in her new body.

Now, she seeks revenge. During the events of the Heart of Winter expansion, she possesses the barbarian warrior Wylfdane, unites the barbarian tribes under him, and calls them to war against the Ten Towns.

Near the beginning of the Heart of Winter expansion, the party parlays with Icasaracht's spirit inhabiting the body of Wylfdane, without knowing that it's her.

At the end of the expansion, after her identity is revealed, you must take the battle to Icasaracht's iceberg in the Sea of Moving Ice and fight your way down to her lair to kill both her corporeal form and her soul gem. 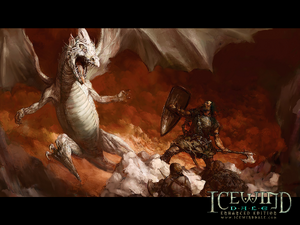 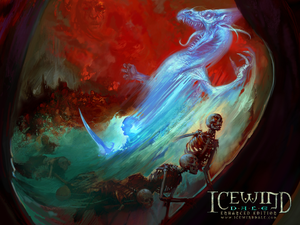 Retrieved from "https://icewinddale.fandom.com/wiki/Icasaracht?oldid=11506"
Community content is available under CC-BY-SA unless otherwise noted.